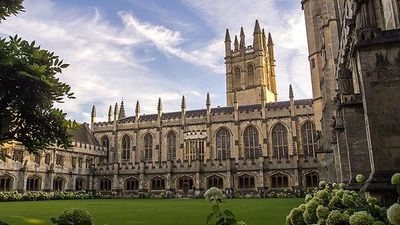 Magdalen College is a constituent college of the University of Oxford. It was founded in 1458 by William of Waynflete. Today, it is one of the wealthiest colleges, with a financial endowment of £273.2 million as of 2018, and one of the strongest academically, setting the record for the highest Norrington Score in 2010 and topping the table twice since then. It is home to several of the University's distinguished chairs, including the Agnelli-Serena Professorship, the Sherardian Professorship, and the four Waynflete Professorships.

The large, square Magdalen Tower is an Oxford landmark, and it is a tradition, dating to the days of Henry VII, that the college choir sings from the top of it at 6 a.m. on May Morning. The college stands next to the River Cherwell and the Oxford botanic garden, and within its grounds has a deer park and Addison's Walk.