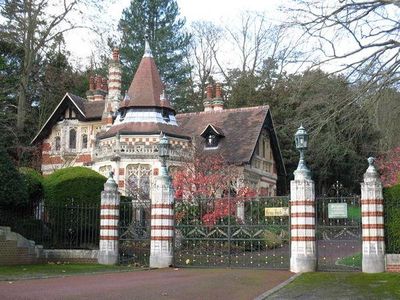 Friar Park is an approximately 30-room Victorian neo-Gothic mansion in Henley-on-Thames, England, built in 1889. It was originally owned by eccentric lawyer Sir Frank Crisp and purchased in January 1970 by musician George Harrison. The site covers about 62 acres . Features include caves, grottoes, underground passages, a multitude of garden gnomes, and an Alpine rock garden with a scale model of the Matterhorn. Though rumour and tabloid reports often claim the building has 120 rooms, this was denied by the current owner, Olivia Harrison, while speaking to NPR Fresh Air in March 2004, at which time she clarified the number was somewhere around 30.
The main house is listed Grade II on the National Heritage List, and the gardens of Friar Park are also listed Grade II on the Register of Historic Parks and Gardens. In addition to the main house, the Lower Lodge, Middle Lodge, and Upper Lodge are all also individually listed Grade II. The entrance walls and piers of the Lower Lodge, and the railed wall piers and gates of the Middle Lodge are also listed Grade II.