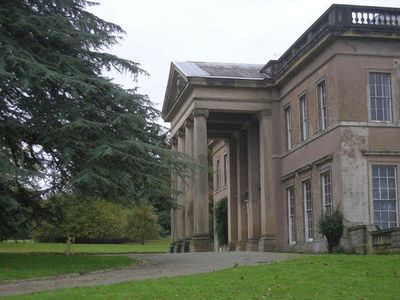 Brogyntyn, or Porkington, is a mansion in the parish of Selatyn to the north-west of Oswestry in Shropshire, England. Brogyntyn Hall was the home of the Ormsby-Gore family from 1815, and had previously been the estate of their ancestors the Maurices and Owens since the sixteenth century. It was abandoned and uninhabited from around 1985.
It was a residence of members of the princely dynasty of the Welsh kingdom of Powys and one of the taî'r uchelwyr in late medieval Wales. It subsequently came into the possession of the Ormsby-Gore family . Its English correspondent is sometimes given as Porkington. A manuscript known to have been in the possession of Brogyntyn in 1574 was a copy of the Hanes Grufudd ab Cynan.
The house itself is of brick dating from circa 1730 refaced and much added to between 1813–20 by the architect Benjamin Gummow. It is noted for a portico of four giant unfluted Ionic columns with scrolls and pediment. Outside can be seen an arch with 2 pairs of unfluted Ionic columns. In the entrance hall survives an elaborately carved fireplace dated 1617.