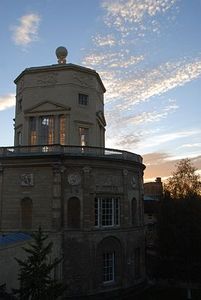 Radcliffe Observatory was the astronomical observatory of the University of Oxford from 1773 until 1934, when the Radcliffe Trustees sold it and built a new observatory in Pretoria, South Africa. It is a Grade I listed building. Today, the observatory forms a part of the Green Templeton College of the University of Oxford.
The observatory was founded and named after John Radcliffe by the Radcliffe Trustees. It was built on the suggestion of the astronomer Thomas Hornsby, who was occupying the Savilian Chair of Astronomy, following his observation of the notable transit of Venus across the sun's disc in 1769 from a room in the nearby Radcliffe Infirmary.