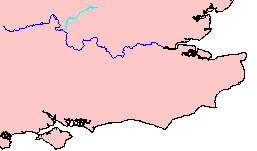 The general course of the River Thame is south-westward and it runs from each of the longest of its many sources to the River Thames about 40 mi . The Thame rises in the English county of Buckinghamshire and discharges in south-east Oxfordshire.

The Thame's source is three streams which rise in the wide Vale of Aylesbury on the north side of the Chiltern Hills. These streams converge north-east of Aylesbury, the county town of Buckinghamshire. The Thame played a key role in the English Civil War when John Hampden led the force of Parliamentarians successfully defending Aylesbury at the Battle of Holman's Bridge, where a small road crosses the river, in 1642.