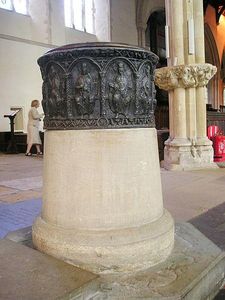 The Abbey Church of St Peter and St Paul, more usually called Dorchester Abbey, is a Church of England parish church in Dorchester on Thames, Oxfordshire, about 8 miles southeast of Oxford. It was formerly a Norman abbey church and was built on the site of a Saxon cathedral.

Alexander, Bishop of Lincoln founded Dorchester Abbey in 1140 for the Arrouaisian Order of Augustinian canons . Dorchester had been a Roman town and was later adopted by the Mercians. It had been the seat of a bishopric from AD 634 when Pope Honorius I had sent Saint Birinus, its first bishop, to that district, until 1085 when the Mercian See was transferred to Lincoln.