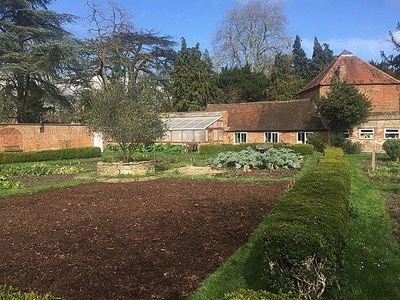 The Abbey in Sutton Courtenay is a medieval courtyard house in the English county of Oxfordshire . It is located in the Vale of White Horse near the River Thames, across the road from the twelfth-century Norman Hall and the Manor House. The Abbey has been recognised as a building of outstanding historic and architectural interest and is considered to be a ‘textbook’ example of an English medieval manor house. It has been a Grade I-listed building since 1952.
The Abbey has its origins in the thirteenth century as a rectory of Abingdon Abbey, a Benedictine monastery up north in Abingdon-on-Thames. Several construction phases took place during the Middle Ages, carried out by prominent figures like Solomon of Rochester, Thomas Beckington and William Say, but it wasn't until the seventeenth century that the current plan was completed. It was probably during the Victorian era that the house obtained the name 'The Abbey'. From 1495 to 1867, The Abbey was in possession of St George's Chapel at Windsor Castle, who leased the estate among others to John Fettiplace.