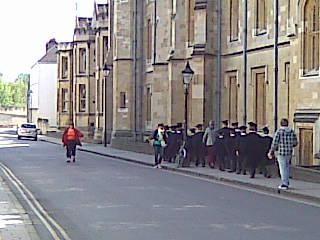 New College School is an independent preparatory school for boys aged 4 to 13 in Oxford. It was founded in 1379 by William of Wykeham to provide for the education of 16 choristers for the chapel of New College, Oxford.

New College School traces its origins to November 1379 when it was founded by William of Wykeham, Bishop of Winchester, as part of the foundation of the College of St Mary of Winchester in Oxford, more commonly known as New College. Wykeham himself paid for the choirboys, chaplains and clerks to sing for services at chapel. Records from the 1620s state that choirboys were accommodated on the College site itself, using an attic as the schoolroom. Despite a brief disruption due to the English Civil War the "school" continued to thrive. By the late 17th century, the vestry and song-room were refitted to accommodate new boys, marking the moment when the school started educating both choristers and non-choristers. The school did not have a permanent home for some years, moving back and forth between the College buildings and various sites outside the College. The current site was purchased in 1903 from Merton College. The school's houses were renamed in the early twenty-first century to commemorate four famous figures from New College's past.