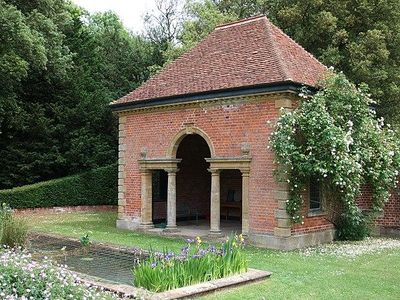 Easton Lodge was a Victorian Gothic style stately home in Little Easton, and north-west from Great Dunmow, Essex, England. Once famous for its weekend society gatherings frequented by the Prince of Wales , it was one of many country houses destroyed during the 20th century. Part of the west wing still stands; and the Grade II listed gardens designed by Harold Peto are under restoration and opened to the public.
Designed by Thomas Hopper, Easton Lodge replaced an earlier Elizabethan mansion built in 1597 by Henry Maynard, which had been destroyed by fire in 1847. The Elizabethan house had itself replaced an earlier hunting lodge, situated by the church, which had been granted to Henry Maynard in 1590 by Queen Elizabeth I.