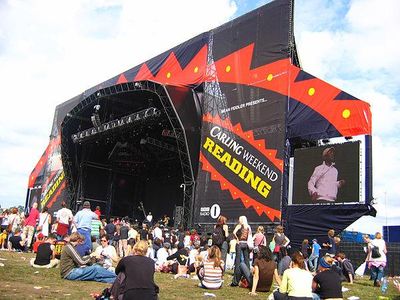 The Reading and Leeds Festivals are a pair of annual music festivals that take place in Reading and Leeds in England. The events take place simultaneously on the Friday, Saturday and Sunday of the August bank holiday weekend, sharing the same bill. The Reading Festival is held at Little John's Farm on Richfield Avenue in central Reading, near the Caversham Bridge . The Leeds event is held in Bramham Park, near Wetherby, the grounds of a historic house . Campsites are available at both sites and weekend tickets include camping. Day tickets are also sold.

The Reading Festival, the older of the two festivals, is the world's oldest popular music festival still in existence. Many of the UK's most successful rock and pop bands have played at the festival, including The Rolling Stones, Fleetwood Mac, The Kinks, Pink Floyd, Deep Purple, The Who, Cream, Black Sabbath, Judas Priest, Genesis, Thin Lizzy, Iron Maiden, The Jam, The Police, Status Quo, The Pogues, Blur, Pulp, Muse, The Cure, Radiohead, The Libertines, Arctic Monkeys, Biffy Clyro, The 1975, Franz Ferdinand and Oasis. The festival has also hosted prominent international acts such as Alice Cooper, Twisted Sister, The Doobie Brothers, Iggy Pop, AC/DC, Metallica, Mika, Slipknot, Guns N' Roses, Eminem, Nirvana, Hole, Foo Fighters, blink-182, The Strokes, Green Day, Faith No More, My Chemical Romance, and Red Hot Chili Peppers. The festival has had various musical phases over the years, but since the current two-site format was adopted in 1999, rock, alternative, indie, punk and metal have been the main genres featured in the line-up. More recently hip hop has comprised an increasing proportion of the lineup, including headline sets by artists such as Kendrick Lamar and Post Malone.