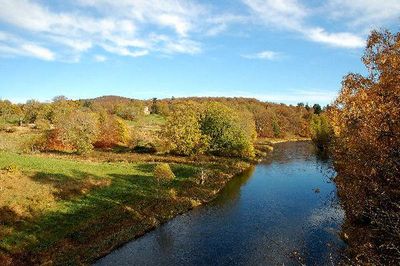 The River Don is a river in north-east Scotland. It rises in the Grampians and flows eastwards, through Aberdeenshire, to the North Sea at Aberdeen. The Don passes through Alford, Kemnay, Inverurie, Kintore, and Dyce. Its main tributary, the River Ury, joins at Inverurie.
The Don rises in the peat flat beneath Druim na Feithe, and in the shadow of Glen Avon, before flowing quietly past the ice-age moraine and down to Cock Bridge, below the picturesque site of the recently demolished Delnadamph Lodge. Several streams, the Dhiver, Feith Bhait, Meoir Veannaich, Cock Burn and the Allt nan Aighean merge to form the embryonic Don. Water from the north of Brown Cow Hill drains into the Don, while water from the west side runs into the River Spey and that from the south side into the Dee. The Don follows a circuitous route eastwards past Corgarff Castle, through Strathdon and the Howe of Alford before entering the North Sea just north of Old Aberdeen.