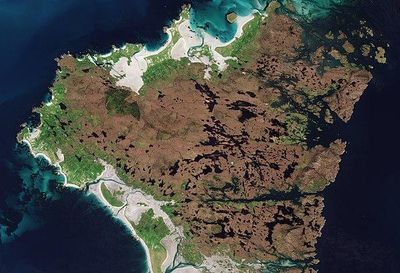 In Donald Munro's A Description of the Western Isles of Scotland Called Hybrides of 1549, North Uist, Benbecula and South Uist are described as one island of Ywst . Starting in the south of this 'island', he described the division between South Uist and Benbecula where "the end heirof the sea enters, and cuts the countrey be ebbing and flowing through it". Further north of Benbecula he described North Uist as "this countrey is called Kenehnache of Ywst, that is in Englishe, the north head of Ywst".
Some have taken the etymology of Uist from Old Norse, meaning "west", much like Westray in the Orkney Islands. Another speculated derivation of Uist from Old Norse is Ívist, derived from vist meaning "an abode, dwelling, domicile".