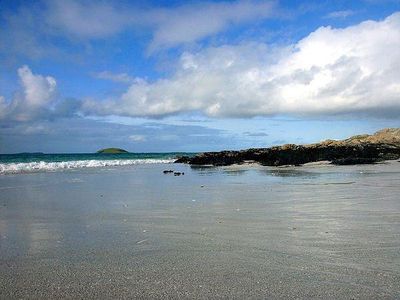 Eriskay , from the Old Norse for "Eric's Isle", is an island and community council area of the Outer Hebrides in northern Scotland with a population of 143, as of the 2011 census. It lies between South Uist and Barra and is connected to South Uist by a causeway which was opened in 2001. In the same year Ceann a' Ghàraidh in Eriskay became the ferry terminal for travelling between South Uist and Barra. The Caledonian MacBrayne vehicular ferry travels between Eriskay and Ardmore in Barra. The crossing takes around 40 minutes.

Although only a small island Eriskay has many claims to fame that have made the island well-known far beyond the Hebrides. It is associated with the traditional Hebridean song, the Eriskay Love Lilt; with the Eriskay Pony and the Eriskay jersey . It is the real Whisky Galore! island: it was just off Eriskay that the SS Politician ran aground in 1941 with its famous cargo. On 2 August 1745 the privateer Du Teillay landed Bonnie Prince Charlie with his "seven men of Moidart" on Eriskay to start the "Forty-Five Jacobite Rising". An important early documentary film, Eriskay: A Poem of Remote Lives, made in 1934 by a German traveller, Werner Kissling, was set on the island.