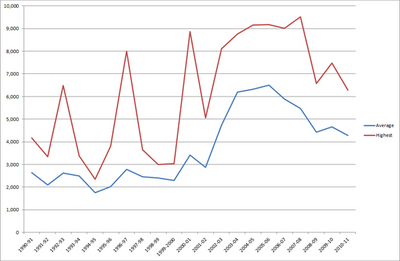 Huish Park is a football stadium located in Yeovil, Somerset, England. The stadium has been home to Yeovil Town F.C. since its completion in 1990, following their relocation from Huish. Huish Park has a capacity of 9,565 with terraces behind each of the goals.
In January 1985, Yeovil started negotiations to sell the Huish Athletic Ground and move to a new stadium in the Houndstone area of Yeovil on the site of an old army camp. Negotiations commenced between the club and Bartlett Construction regarding moving from Huish to a new site at Houndstone Camp, with the first meeting taking place on 12 November 1985 when an offer of £1.3m was made for the Huish site. Following further meetings and more detailed plans being studied the offer was raised to over £2m early in 1986, when the directors agreed in principle for the move to go ahead. A company, Collier & Madge, who specialised in buying and selling supermarket sites was engaged to advise the club and to ensure the best possible price was obtained.