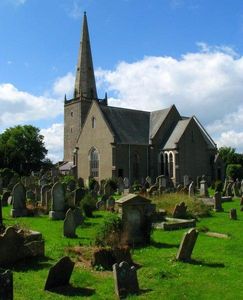 Bangor Abbey was established by Saint Comgall in 558 in Bangor, County Down, Northern Ireland and was famous for its learning and austere rule. It is not to be confused with the slightly older abbey in Wales on the site of Bangor Cathedral.

Comgall founded the monastery at Bangor about 558 A.D. in the County Down, on the southern shore of Belfast Lough. The ancient Annals differ about the exact year, giving various dates between 552 and 559. The earliest, the Annals of Tighernach, and the Annals of Innisfallen, give 558 A.D. as the date of the foundation. The name was sometimes written "Beannchor". The place was also called the "Vale of Angels", because, according to a popular legend, St. Patrick once rested there and saw the valley filled with angels.