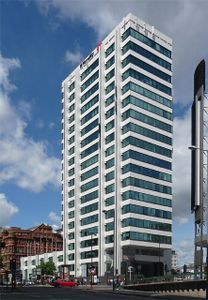 111 Piccadilly, formerly Rodwell Tower or Rodwell House, is a high rise office development in Manchester, England, owned by Bruntwood, which was opened in 1965. The tower is 64 metres (210 ft) which makes it the joint-sixteenth tallest building in Manchester. The building is located at the corner of Ducie Street (near Station Approach which leads to Manchester's main railway station, Manchester Piccadilly). It is the last building in Piccadilly which continues here as London Road.