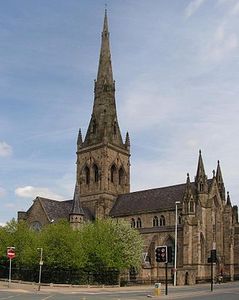 The Cathedral Church of St. John the Evangelist, usually known as Salford Cathedral, is a Roman Catholic cathedral on Chapel Street, Salford, Greater Manchester, England. It is the seat of the Bishop of Salford and mother church of the Diocese of Salford. The architectural style is decorated neo-Gothic, and the Cathedral is a Grade II* listed building.
St. John's Church, Salford, was built between 1844 and 1848 to designs of Matthew Ellison Hadfield of Weightman and Hadfield of Sheffield, by Benjamin Hollins of Manchester. Hadfield's design for St. John's, the first cruciform Catholic church to be built in England since the Reformation, was closely modelled on a number of noted medieval churches. The "west" front and nave are copied on a reduced scale from Howden Minster in the East Riding of Yorkshire; the choir and sanctuary are closely modelled on those of Selby Abbey in North Yorkshire; the decorations of the groined vault are copied from the church of St Jacques in Liege, Belgium; the tower and spire, the latter the tallest in Lancashire at the time of building, are derived from the church of St Mary Magdalene, Newark-on-Trent, Nottinghamshire.