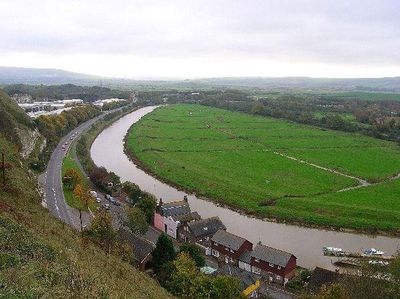 The Ouse is a river in the English counties of West and East Sussex. It rises near Lower Beeding in West Sussex, and flows eastwards and then southwards to reach the sea at Newhaven. It skirts Haywards Heath and passes through Lewes. It forms the main spine of an extensive network of smaller streams, of which the River Uck is the main tributary. As it nears the coast it passes through the Lewes and Laughton Levels, an area of flat, low-lying land that borders the river and another tributary, the Glynde Reach. It was a large tidal inlet at the time of the Domesday book in 1086, but over the following centuries, some attempts were made to reclaim some of the valley floor for agriculture, by building embankments, but the drainage was hampered by the buildup of a large shingle bar which formed across the mouth of the river by longshore drift.

In 1539, a new channel for the entrance to the river was cut through the shingle bar, and meadows flourished for a time, but flooding returned and meadows reverted to marshland. The engineer John Smeaton proposed a solution for the drainage of the valley in 1767, but it was only partly implemented. William Jessop surveyed the river in 1788, and produced proposals to canalise the upper river above Lewes, and to radically improve the lower river. The Proprietors of the River Ouse Navigation were created by Act of Parliament in 1790, and eventually built 19 locks, to enable boats to reach Upper Ryelands Bridge at Balcombe. Trustees and the Commissioners of the Lewes and Laughton Levels jointly managed the work on the lower river, and the agriculturalist John Ellman continued the progress while he was Expenditor for the Commissioners, which enabled 120-ton ships to reach Lewes by 1829. Navigation on the upper river could not compete with the railways, and all traffic had ceased by 1868.