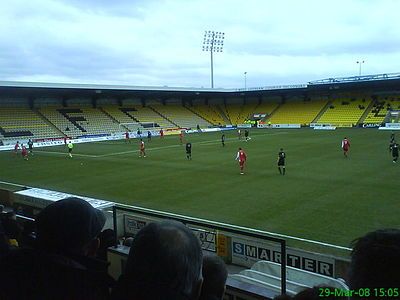 The Almondvale Stadium, currently also known as the Tony Macaroni Arena for sponsorship purposes, is a football stadium, located in the Almondvale area of Livingston, West Lothian Scotland. It has been the home ground of Scottish League One club Livingston since 1995, and has an all-seater capacity of 8,716.
The stadium was constructed in 1995 as a joint venture between Meadowbank Thistle and the Livingston Development Corporation . Part of the deal involved the relocation of Meadowbank Thistle to the town and a name change to Livingston. When the LDC was wound up, ownership of the Stadium was transferred to West Lothian Council.