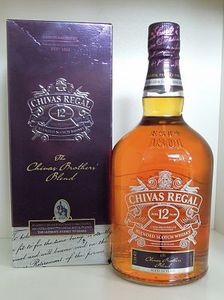 Chivas Regal is a blended Scotch whisky produced by Chivas Brothers, which is part of Pernod Ricard. Chivas Regal traces its roots back to 1801. Chivas Regal's home is Strathisla distillery at Keith, Moray in Speyside, Scotland, the oldest operating Highland distillery, which was founded in 1786.
It is the market-leading scotch whisky 12 years and above in Europe and Asia Pacific. Chivas Regal sales grew by 61% between 2002 and 2008. In global terms, Chivas Regal recorded volume sales of 4.9 million nine-litre cases in 2012 and 2013 but sales have decreased steadily since, dropping to 4.4 million cases in 2015.