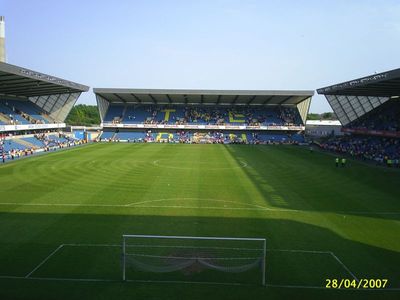 The Den (previously called The New Den) is a football stadium and the home of Millwall Football Club. It is situated in South Bermondsey, South East London, almost directly adjacent to the railway line between London Bridge and New Cross Gate, and the SELCHP incinerator. It is under a quarter of a mile away from the original Den. Built on a previous site of housing, a church and the Senegal Fields playing fields, it has an all-seated capacity of 20,146, with the average attendance for the 2010-11 season being 12,438. The Den is the sixth ground that Millwall have occupied since their formation as a football club in the Millwall area of the Isle of Dogs in 1885.