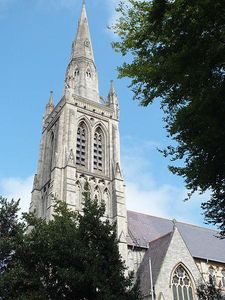 Bournemouth is a large coastal resort town on the south coast of England, east of the 96-mile-long Jurassic Coast, a World Heritage Site. At the 2011 census, the town had a population of 183,491, making it the largest in Dorset. With Poole to the west and Christchurch in the east, Bournemouth is part of the South East Dorset conurbation, which has a population of 465,000.

Before it was founded in 1810 by Lewis Tregonwell, the area was a deserted heathland occasionally visited by fishermen and smugglers. Initially marketed as a health resort, the town received a boost when it appeared in Augustus Granville's 1841 book, The Spas of England. Bournemouth's growth accelerated with the arrival of the railway, and it became a town in 1870. Historically part of Hampshire, it joined Dorset with the reorganisation of local government in 1974. Since 1997, the town has been administered by a unitary authority independent of Dorset County Council, although it remains part of that ceremonial county. The local council is Bournemouth Borough Council. From 1 April 2019 it will be part of the new Bournemouth, Christchurch and Poole Council.