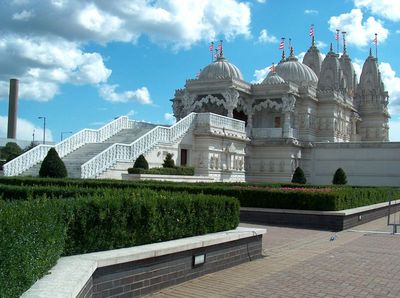 BAPS Shri Swaminarayan Mandir, Neasden (also commonly known as the Neasden Temple), is a Hindu temple in the London Borough of Brent in northwest London. Built entirely using traditional methods and materials, Neasden’s Swaminarayan Mandir has been described as being Britain’s first authentic Hindu temple. It was also Europe’s first traditional Hindu stone temple, as distinct from converted secular buildings. It is a part of the Bochasanwasi Shri Akshar Purushottam Swaminarayan Sanstha (BAPS) organization and was inaugurated on August 20, 1995 by Pramukh Swami Maharaj.