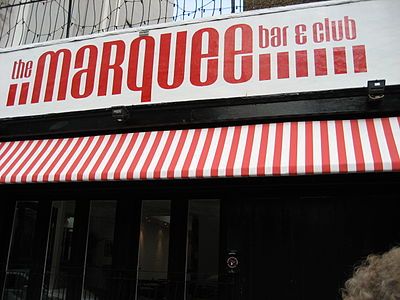 The Marquee Club was a music venue first located at 165 Oxford Street, London, England when it opened in 1958 with a range of jazz and skiffle acts. Its most famous period was from 1964 to 1988 at 90 Wardour Street in Soho, and it finally closed when at 105 Charing Cross Road in 1996, though the name has been revived unsuccessfully three times in the 21st century. It was always a small and relatively cheap club, located in the heart of the music industry in London's West End, and used to launch the careers of generations of rock acts.
It was a key venue for early performances by bands who were to achieve worldwide fame in the 1960s and remained a venue for young bands in the following decades. It was the location of the first-ever live performance by The Rolling Stones on 12 July 1962.