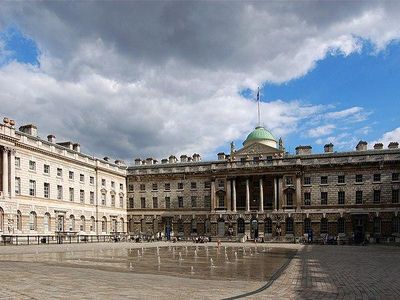 Somerset House is a large Neoclassical building situated on the south side of the Strand in central London, overlooking the River Thames, just east of Waterloo Bridge. The Georgian quadrangle, which was built on the site of a Tudor palace belonging to the Duke of Somerset, was designed by Sir William Chambers in 1776. It was further extended with Victorian outer wings to the east and west in 1831 and 1856 respectively. Somerset House stood directly on the River Thames until the Victoria Embankment was built in the late 1860s.
The Georgian structure was built to be a grand public building housing various government and public-benefit society offices. Its present tenants are a mixture of various organisations, generally centred around the arts and education.