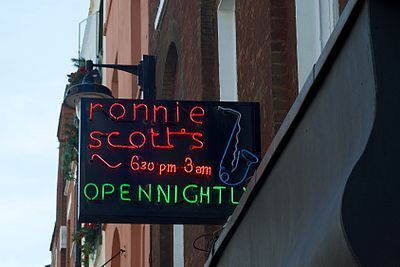 The club opened on 30 October 1959 in a basement at 39 Gerrard Street in London's Soho district. It was set up and managed by musicians Ronnie Scott and Pete King. In 1965 it moved to a larger venue nearby at 47 Frith Street. The original venue continued in operation as the "Old Place" until the lease ran out in 1967, and was used for performances by the up-and-coming generation of musicians.
Zoot Sims was the club's first transatlantic visitor in 1962, and was succeeded by many others in the years that followed. Many UK jazz musicians were also regularly featured, including Tubby Hayes and Dick Morrissey who would both drop in for jam sessions with the visiting stars. In the mid-1960s, Ernest Ranglin was the house guitarist. The club's house pianist until 1967 was Stan Tracey. For nearly 30 years it was home of a Christmas residency to George Melly and John Chilton's Feetwarmers. In 1978, the club established the label Ronnie Scott's Jazz House, which issued both live performances from the club and new recordings.