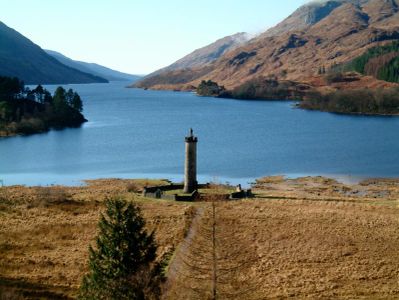 The place where the Glenfinnan Monument stands is a place loaded with history. The monument north of Loch Shiel is in memory of the Jacobite uprising of August 1745 led by Prince Charles Stuart, or 'Bonnie Prince Charlie. He and his companions came to this place to claim the British throne. After consuming the necessary brandy they went to war. On April 16, 1746, they died at Culloden (The Massacre of Glen Coe). But King George II was almost beaten. The defeat at Culloden did have the effect that the Highlands were opened up. The clan system was abolished and even the traditional tartan and the bagpipes were banned for eleven years because they could inspire resistance against the British.