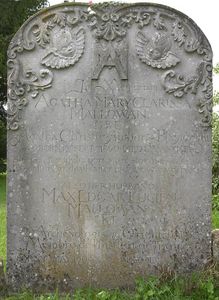 Dame Agatha Christie died on 12 January 1976 at age 85 from natural causes at her home in Winterbrook. She is buried here in the churchyard of St Mary's, Cholsey, having chosen the plot for their final resting place with her husband Sir Max some ten years before she died. The simple funeral service was attended by about 20 newspaper and TV reporters, some having travelled from as far away as South America. Thirty wreaths adorned Dame Agatha's grave, including one from the cast of her long-running play The Mousetrap and one sent 'on behalf of the multitude of grateful readers' by the Ulverscroft Large Print Book Publishers. She was survived by her only child, Rosalind Hicks, and only grandson, Mathew Prichard. Her husband, Max, died in 1978, aged 74.