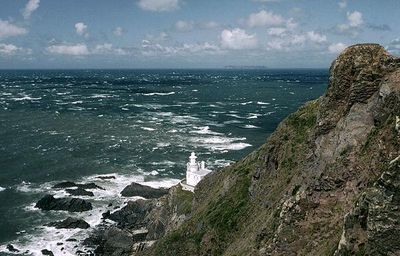 The village of Hartland, whose parish incorporates the hamlet of Stoke to the west and the village of Meddon in the south, is the most north-westerly settlement in the county of Devon, England.

Now a large village which acts as a centre for a rural neighbourhood and has minor tourist traffic, until Tudor times Hartland was an important port. It lies close to the promontory of Hartland Point, where the coast of Devon turns from facing north into the Bristol Channel to face west into the Atlantic Ocean. There is an important lighthouse on the point. The town's harbour, Hartland Quay, is to the south of the point: the quay was originally built in the late 16th century but was swept away in 1887. The high tower of the Church of Saint Nectan in Stoke remains a significant landmark for ships in the Bristol Channel. The appropriate electoral ward is called Hartland and Bradworthy. Its population at the 2011 census was 3,019.