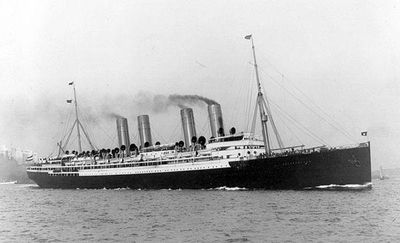 Although SS Deutschland was able to capture the Blue Riband from Kaiser Wilhelm der Grosse, crossing the Atlantic Ocean in just over five days, she suffered from persistent engine issues, and was withdrawn from transatlantic service in 1910 after just ten years. At this time she was renamed Viktoria Luise and converted to a dedicated cruise ship. As Viktoria Luise she saw brief service in World War I. Because of the bad condition of the ship after the World War, it was not seized by the Allies and was for a time the only remaining large steam ship sailing under a German flag. In 1921 she was converted again into an immigrant ship and renamed Hansa, although changes in United States immigration laws reduced the value of this trade, and ultimately she was sold for scrap in 1925.