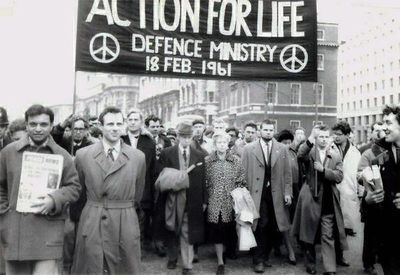 The Campaign for Nuclear Disarmament is an organisation that advocates unilateral nuclear disarmament by the United Kingdom, international nuclear disarmament and tighter international arms regulation through agreements such as the Nuclear Non-Proliferation Treaty. It opposes military action that may result in the use of nuclear, chemical or biological weapons and the building of nuclear power stations in the UK.

CND began in November 1957 when a committee was formed, including Canon John Collins as chairman, Bertrand Russell as president and Peggy Duff as organising secretary. The committee organised CND's first public meeting at Methodist Central Hall, Westminster on 17 February 1958. Since then, CND has periodically been at the forefront of the peace movement in the UK. It claims to be Europe's largest single-issue peace campaign. Between 1959 and 1965 it organised the Aldermaston March, which was held over the Easter weekend from the Atomic Weapons Establishment near Aldermaston to Trafalgar Square, London.