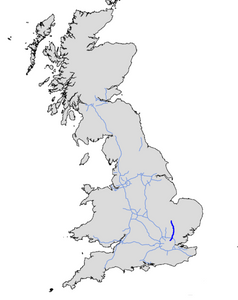 The M11 motorway is a 55-mile motorway that runs north from the North Circular Road in South Woodford in northeast London to the A14, northwest of Cambridge, England. Originally proposed as early as 1915, various plans were considered throughout the 1960s, with final construction being undertaken between 1975 and 1980. The motorway was opened in stages, with the first stage opening in June 1975, and the completed motorway becoming fully operational in February 1980. Running from South Woodford to Girton, the motorway provides direct access to Harlow, a large new town, as well as the city of Cambridge and since 2002, the motorway has greatly improved access to London Stansted Airport, the fourth busiest airport in the United Kingdom.

The M11 starts in South Woodford in northeast London at Junction 4, with the North Circular , it then heads NNE, passing east of Loughton and Theydon Bois as well as Epping Forest, meeting the M25 motorway at Junction 6, and then veering approximately north, passing to the east of Harlow. The M11 gives access to Bishop's Stortford and the motorway's only service station via Junction 8. This is followed immediately by the recently constructed Junction 8A, which provides a free-flow link to the improved A120 that links to Stansted Airport. The M11 then traverses part of Cambridgeshire, meeting a spur for the A11 at Junction 9, and then finally ends at Junction 14, the busy Girton Interchange, with the road continuing through the junction and becoming the A14, which continues the route on to Huntingdon and the north.