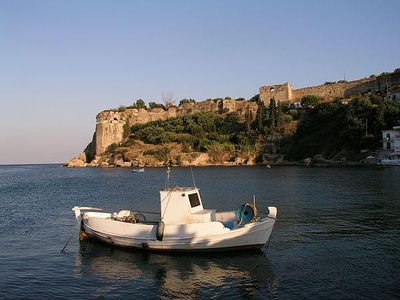 Koroni or Corone is a town and a former municipality in Messenia, Peloponnese, Greece. Since the 2011 local government reform it is part of the municipality Pylos-Nestoras, of which it is a municipal unit. Known as Corone by the Venetians and Ottomans, the town of Koroni sits on the southwest peninsula of the Peloponnese on the Gulf of Messinia in southern Greece, 56 km by road southwest of Kalamata. The town is nestled on a hill below a Venetian castle and reaches to the edge of the gulf. The town was the seat of the former municipality of Koróni, which has a land area of 105 km2 and a population of 4,366 . The municipal unit consists of the communities Akritochori, Charakopio, Chrysokellaria, Falanthi, Kaplani, Kompoi, Koroni, Vasilitsi, Vounaria and Yameia. It also includes the uninhabited island of Venétiko.

The town was founded in ancient times. The 2nd century Greek geographer Pausanias in his book Messeniaka reports the original location of Koroni at modern Petalidi, a town a few kilometers north of Koroni. He also reports many temples of Greek gods and a copper statue of Zeus. In the centuries that followed the town of Koroni moved to its current location, where the ancient town of Asini had once stood. In the 6th and 7th centuries AD, the Byzantines built a fortress there.