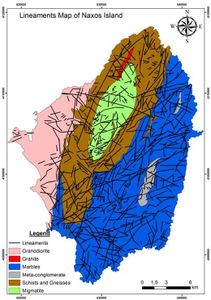 Below the sediments in this area, you will find the Granodiorite of Naxos (pink on the map). Granodiorite is a plutonic igneous rock, formed by intrusion of silica-rich magma, which cools in batholiths or stocks below the Earth's surface. It is usually only exposed at the surface after uplift and erosion have occurred. A granodiorite intrusive igneous rock similar to granite, but containing more plagioclase feldspar than orthoclase feldspar. Biotite and amphiboles often in the form of hornblende are more abundant in granodiorite than in granite, giving it a more distinct two-toned or overall darker appearance. Mica may be present in well-formed hexagonal crystals, and hornblende may appear as needle-like crystals.

The Granodiorite has a very sharp contact with the gneisses and is full of large mafic enclaves, which are not xenoliths but fragments of early differentiated magma. The granodiorite is very coarse-grained, indicative of slow cooling because it was intruded into hot rocks (the gneisses). It represents the roots of a volcano, ie the magma chamber.