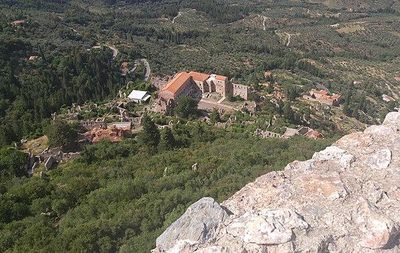 Mystras or Mistras , also known as Myzithras in the Chronicle of the Morea, is a fortified town and a former municipality in Laconia, Peloponnese, Greece. Situated on Mt. Taygetos, near ancient Sparta, it served as the capital of the Byzantine Despotate of the Morea in the 14th and 15th centuries, experiencing a period of prosperity and cultural flowering. The site remained inhabited throughout the Ottoman period, when it was mistaken by Western travellers for ancient Sparta. In the 1830s, it was abandoned and the new town of Sparti was built, approximately eight kilometres to the east.

Since the 2011 local government reform it is part of the municipality Sparti, of which it is a municipal unit.