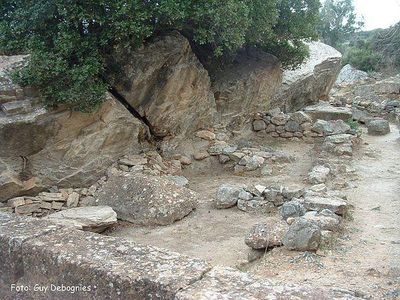 Brauron was one of the twelve cities of ancient Attica, but never mentioned as a deme, though it continued to exist down to the latest times. It was situated on or near the eastern coast of Attica, between Steiria and Halae Araphenides, near the river Erasinus. Brauron is celebrated on account of the worship of Artemis Brauronia, in whose honour a festival was celebrated in this place.
The sanctuary of Artemis at Brauron is an early sacred site on the eastern coast of Attica near the Aegean Sea in a small inlet. The inlet has silted up since ancient times, pushing the current shoreline farther from the site. A nearby hill, c. 24 m high and 220 m to the southeast, was inhabited during the Neolithic era, c. 2000 BCE, and flourished particularly from Middle Helladic to early Mycenaean times as a fortified site . Occupation ceased in the LHIIIb period, and the acropolis was never significantly resettled after this time. This gap in the occupation of the site lasted from LHIIIb until the 8th century BCE. Brauron was one of the twelve ancient settlements of Attica prior to the synoikismos of Theseus, who unified them with Athens.