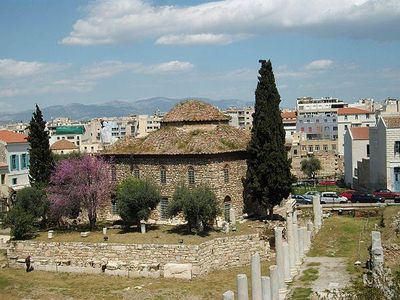 The Fethiye Mosque is a 17th-century Ottoman mosque in central Athens, Greece. Repurposed after Greek independence in 1834, it fell into disrepair, but after renovations it was reopened to the public in 2017 and is presently being used for cultural exhibitions.

The Fethiye Mosque is located on the northern side of the ancient Roman Agora in Athens, near the Tower of the Winds, and was built on the ruins of a Christian basilica from the middle Byzantine period . The Christian church was converted into a mosque in 1456/58, soon after the Ottoman conquest of the Duchy of Athens, to coincide with the visit to the city by Sultan Mehmed the Conqueror in 1458.