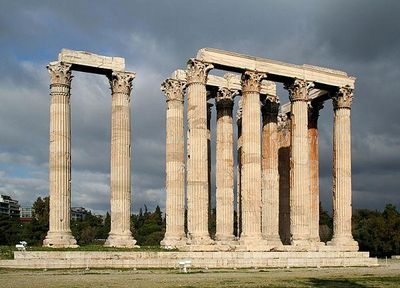 The Temple of Olympian Zeus , also known as the Olympieion or Columns of the Olympian Zeus, is a former colossal temple at the center of the Greece capital Athens. It was dedicated to "Olympian" Zeus, a name originating from his position as head of the Olympian gods. Construction began in the 6th century BC during the rule of the Athenian tyrants, who envisaged building the greatest temple in the ancient world, but it was not completed until the reign of the Roman Emperor Hadrian in the 2nd century AD, some 638 years after the project had begun. During the Roman period the temple -that included 104 colossal columns- was renowned as the largest temple in Greece and housed one of the largest cult statues in the ancient world.

The temple's glory was short-lived, as it fell into disuse after being pillaged during a barbarian invasion in 267 AD, just about a century after its completion. It was probably never repaired and was reduced to ruins thereafter. In the centuries after the fall of the Roman Empire, it was extensively quarried for building materials to supply building projects elsewhere in the city. Despite this, a substantial part of the temple remains today, notably sixteen of the original gigantic columns, and it continues to be part of a very important archaeological site of Greece