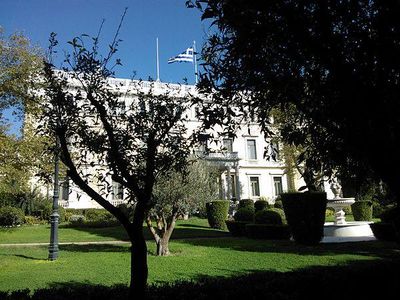 The Presidential Mansion in Athens, Greece, is the official residence of the President of the Hellenic Republic. It served previously as the Royal Palace , until the abolition of the monarchy by the 1973 referendum.

The decision to construct the building which currently is used as the Presidential Mansion was made in 1868. That year, King George I's son, Constantine, the heir to the throne, was born and the Greek state decided to present him with a private dwelling, when he came of age. Twenty-one years later when Constantine married princess Sophia of Prussia, the state assigned the planning of "The Crown Prince's Palace", as the building became known, to Ernst Ziller. Building began in 1891 and was completed six years later in 1897.