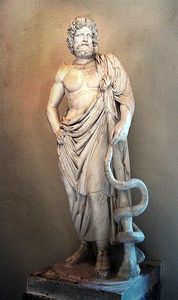 The Temple of Asclepius was a sanctuary in Epidaurus dedicated to Asclepius. It was the main holy site of Asclepius. The sanctuary at Epidaurus was the rival of such major cult sites as the Sanctuary of Zeus at Olympia and Apollo at Delphi. The temple was built in the early 4th-century BC. If still in use by the 4th-century, the temple would have been closed during the persecution of pagans in the late Roman Empire, when the Christian Emperors issued edicts prohibiting non-Christian worship.

Pausanias described the myth around the foundation of the temple, as well as its religious significance to the worship of Asclepius in the 2nd century: