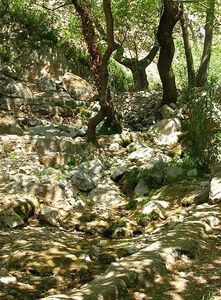 The Castalian Spring, in the ravine between the Phaedriades at Delphi, is where all visitors to Delphi — the contestants in the Pythian Games, and especially pilgrims who came to consult the Delphic Oracle — stopped to wash themselves and quench their thirst; it is also here that the Pythia and the priests cleansed themselves before the oracle-giving process. Finally Roman poets regarded it as a source of poetic inspiration. According to some mythological versions it was here that Apollo killed the monster, Python, who was guarding the spring, and that is why it was considered to be sacred.

Two fountains, which were fed by the sacred spring, still survive. The archaic 6th century BCE fountain house has a marble-lined basin surrounded by benches. Water was brought here by means of a short and small aqueduct and was distributed by a system of water pipes ending in lion-headed spouts.