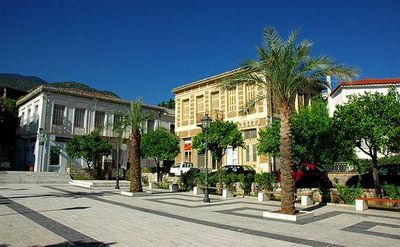 Amfissa is a town in Phocis, Greece, part of the municipality of Delphi, of which it is the seat and a municipal unit. The municipal unit has an area of 315.174 km2. It lies on the northern edge of the olive forest of the Crissaean plain, between two mountains, Giona to the west and Parnassus to the east, 200 km northwest of Athens and 20 km of Delphi, as well as 85 km northeast of Naupactus and 72 km south of Lamia.

Amfissa dates back to antiquity, with its history spanning around 3,000 years, and has been traditionally the largest and capital city of Phocis. It was the most important city of the ancient Greek tribe of the Ozolian Locrians and one of the most powerful cities in Central Greece. In the Middle Ages, Amfissa came to be known as Salona, it declined after several foreign conquests and destructions, but emerged as an important city in the region and played a major role during the Greek War of Independence.