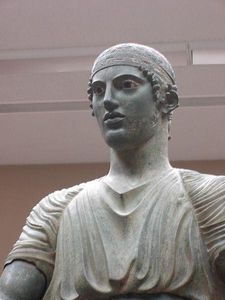 The Charioteer of Delphi, also known as Heniokhos , is one of the best-known statues surviving from Ancient Greece, and is considered one of the finest examples of ancient bronze sculptures. The life-size statue of a chariot driver was found in 1896 at the Sanctuary of Apollo in Delphi. It is now in the Delphi Archaeological Museum.

The statue was set up at Delphi, Greece to commemorate the victory of the tyrant Polyzalus of Gela in Sicily and his chariot in the Pythian Games of 470 BC, which were held at Delphi in honor of Pythean Apollo. It has also been suggested that the complex was actually commemorating the victory of Polyzalos' brother, Hieron, at the same games in analogy to his ex voto after his victory at the Olympic Games.