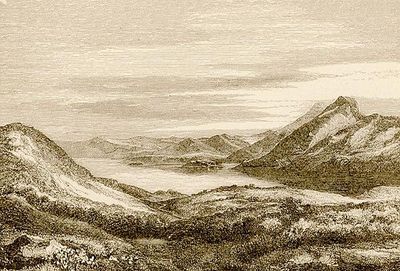 Mount Othrys is a mountain in central Greece, in the northeastern part of Phthiotis and southern part of Magnesia. Its highest summit, Gerakovouni, situated on the border of Phthiotis and Magnesia, is 1,726 m above sea level. The population density in the mountains is low: there are a few small villages, including Anavra in the northwest, Kokkotoi in the northeast, Palaiokerasia in the south and Neraida in the southwest. The length from west to east is about 35 km and the width from north to south is about 25 km. The Pagasetic Gulf lies to the northeast, and the Malian Gulf lies to the south. The summit Gerakovouni lies 19 km south of Almyros, 27 km northeast of Lamia and 44 km southwest of Volos. The upper ranges of the mountain are rocky, and there are forests in the lower ranges. The entire area is also a parkland. The main source of rock is ophiolite.

In Greek mythology Mount Othrys was the base of Kronos and the other Titans during the ten-year war with the Olympian Gods known as the Titanomachy. It was also the birthplace of the elder gods, Hestia, Demeter, Hera, Hades and Poseidon. It was assaulted by the Olympians, led by Cronos’s son Zeus. Zeus later overthrew his father and gained dominion in all of the heavens and the earth.