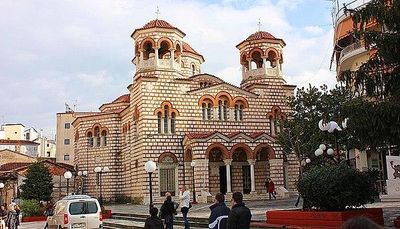 Arta is a city in northwestern Greece, capital of the regional unit of Arta, which is part of Epirus region. The city was known in ancient times as Ambracia . Arta is known for the medieval bridge over the Arachthos River. Arta is also known for its ancient sites from the era of Pyrrhus of Epirus and its well-preserved 13th-century castle. Arta's Byzantine history is reflected in its many Byzantine churches; perhaps the best known is the Panagia Paregoretissa , built about 1290 by Despot Nikephoros I Komnenos Doukas.

The first settlement in the area of the modern city dates to the 9th century B.C. Ambracia was founded as a Corinthian colony in the 7th century B.C. In 294 BC, after forty-three years of semi-autonomy under Macedonian suzerainty, Ambracia was given to Pyrrhus, king of the Molossians and of Epirus, who made it his capital, using Ambracia as a base to attack the Romans. Pyrrhus managed to achieve great but costly victories against the Romans, hence the phrase "Pyrrhic victory" which refers in particular to an exchange at the Battle of Asculum. Nevertheless, Pyrrhus found the time and means to adorn his capital with a palace, temples and theatres. In 146 BC, Ambracia became part of the Roman Republic.