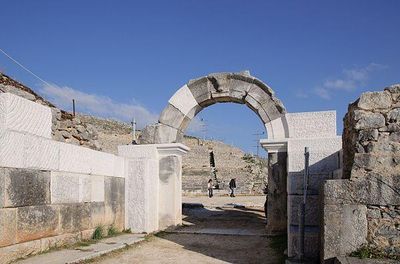 Philippi was a major city northwest of the nearby island, Thasos. Its original name was Crenides after its establishment by Thasian colonists in 360/359 BC. The city was renamed by Philip II of Macedon in 356 BC and abandoned in the 14th century after the Ottoman conquest. The present municipality, Filippoi, is located near the ruins of the ancient city and is part of the region of East Macedonia and Thrace in Kavala, Greece. It was classified as a UNESCO World Heritage Site in 2016.
Thasian colonists established a settlement at Krenides in Thrace in 360/359 BC near the head of the Aegean Sea at the foot of Mt. Orbelos, now called Mt. Lekani, about 13 km north-west of Kavalla, on the northern border of the marsh that, in antiquity, covered the entire plain separating it from the Pangaion hills to the south. In 356 BC King Philip II of Macedon conquered the city and renamed it to Philippi.