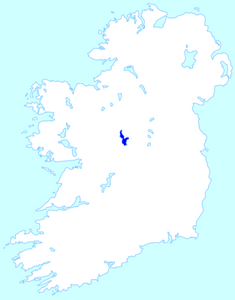 Lough Ree is a lake in the midlands of Ireland, the second of the three major lakes on the River Shannon. Lough Ree is the second largest lake on the Shannon after Lough Derg. The other two major lakes are Lough Allen to the north, and Lough Derg to the south, there are also several minor lakes along the length of the river. The lake serves as a border between the counties of Longford and Westmeath on the eastern side and County Roscommon in the province of Connacht on the western side. The lake is popular for fishing and boating. The lake supports a small commercial eel fishery and is locally famous for its eels on wheels truck. The town of Athlone is situated at the southern end of the lake, and has a harbour for boats going out on the lake. The small town of Lanesboro is at the northern end of the lake.

The island of Inchcleraun in the northern part of the lake is the site of a monastery founded in the early Christian era and contains the remains of several ancient churches. In Irish legends, it was on this island that Queen Maeve was killed. The Viking Turgesius controlled a ringfort on the shores until his death by drowning in Lough Owel.