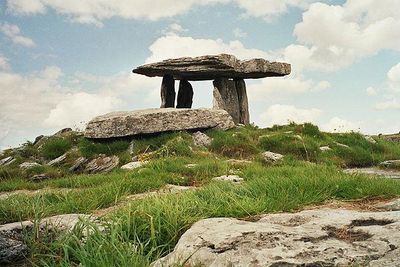 Poulnabrone dolmen is an unusually large dolmen or portal tomb located in the Burren, County Clare, Ireland. Situated on one of the most desolate and highest points of the region, it comprises three standing portal stones supporting a heavy horizontal capstone, and dates to the Neolithic period, probably between 4200 BC and 2900 BC. It the best known and most widely photographed of the approximately 172 dolmens in Ireland.

The karst setting has been formed from limestone laid down around 350 million years ago. The dolmen was built by Neolithic farmers, who chose the location either for ritual, as a territorial marker, or as a collective burial site. What remains today is only the "stone skeleton" of the original monument; originally it would have been covered with soil, and its flagstone capped by a cairn.