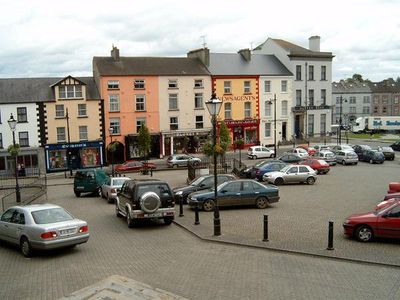 Clones is a small town in western County Monaghan, Ireland. The area is part of the Border Region, earmarked for economic development by the Irish Government due to its currently below-average economic situation. The town was badly hit economically by the partition of Ireland in 1921 because of its location on the border with County Fermanagh in Northern Ireland. The creation of the Irish border deprived it of access to a large part of its economic hinterland for many years. The town had a population of 1,680 at the 2016 census.
Historically Clones was also spelt Clonis, Clonish and Clownish. These are anglicised versions of the Irish Cluain Eois, meaning "Eos's meadow". However, it is also said that the ancient name was Cluan Inis, "island of retreat," it having formerly been nearly surrounded by water.