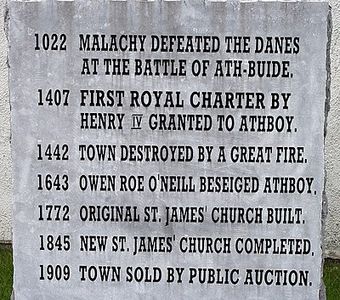 Athboy ,is a small agricultural town located in County Meath.The town is located on the Yellow Ford River, in wooded country near the County Westmeath border.

In medieval times it was a walled stronghold of the Pale. Eoin Roe O'Neill took it in 1643, and six years later Oliver Cromwell camped his army on the Hill of Ward nearby. Also known as Tlachtga, the Hill of Ward was the location for the pagan feast of Samhain, the precursor of modern-day Halloween.